Next Step Housing (NSH) has provided quality, clean and sober, supportive housing to residents of Yakima since 1991. NSH pioneered the development of Alcohol and Drug Free Communities (ADFC’s) in Washington and currently owns and operates the only clean and sober permanent housing for large families with children in the State.

Our community-based Board of Directors and Staff have many years of experience in service provision for special needs populations and expertise in financial management as well as in developing and managing affordable housing.

Next Step Housing (NSH) develops affordable, safe and healthy communities where individuals and families can improve their lives and raise their children in a clean and sober environment. Since 1991, NSH has been and remains one of the leading providers of service-enriched, permanent housing in Alcohol and Drug Free Communities (ADFC’s) in Washington State.

NSH is celebrating over 26 years of housing special needs individuals and families in Central Washington. In 2016, 60% of our residents were homeless when they first applied for housing. We are the only non-profit housing provider in the State that combines individuals living with long-term sobriety from substance abuse and their families with individuals and families living with Developmental Disabilities. Because both groups experience similar marginalization in society, this integration of special needs populations has proven successful. Their parallel capacities and needs make them good neighbors.

All of our housing communities enjoy a Zero Tolerance of Alcohol and Drug Use, both on and off the premises. This is ensured by random, monthly, observed Urine-Analysis and Breathalyzer checks. Residents who return to substance abuse are immediately required to remedy or leave the community to ensure the safety of our residents in long-term sobriety.

Next Step Housing does not discriminate on the basis of race, color, creed, religion, ancestry, national origin, age, sex, marital status, sexual orientation, parental or familial status, political ideology, possession or use of a Section 8 certificate, the presence of any sensory, mental, or physical handicap, or the use of a trained guide or service animal. NSH does not discriminate on any basis prohibited by applicable law.

Mr. Mifsud is celebrating 22 years as Executive Director of NSH. He has over 40 years of program design, implementation and management experience as well as 35 years of experience in property management and development in the private, non-profit and public sectors. A long-term housing advocate for people with special needs, Mr. Mifsud developed the first affordable, independent clean and sober housing units for families with children in the State of Washington. Mr. Mifsud has managed portfolios of 800+ units in four states including commercial properties and tax credit developments. A Certified Families for Self-Sufficiency Specialist, Mr. Mifsud also designed and supervised on-site case management services for a diversity of special needs populations in Washington. Currently, Mr. Mifsud manages all staff as well as finances, fundraising, land acquisition, new developments and major capital improvements for NSH.

Mr. Erickson shares the title of NSH Maintenance Superintendent with Mike Ryckman. Keith became sober in 2007 and has been working with NSH since 2010. He is active in the Yakima Narcotics Anonymous community. Keith says, “Working with people in recovery is really a dream come true for me. I love that I am on staff at Next Step. Being of service to my community helps keeps me clean and sober.”

Mr. Dominguez originally came to NSH as a resident in 2010. In 2012, he began working for NSH as a People 4 People intern through their Parents Work First Program. He was hired as a Case Manager to work with homeless veterans at Pear Tree Place III in 2013. He received his Associates of Applied Science in Chemical Dependency Counseling from Yakima Valley Community College in 2012 and completed his Bachelor of Science in Religion in 2012. Mr. Dominguez is bilingual and bicultural and also works for Yakima Memorial Hospital as a Chaplin focused on hospice and end of life care services. He sits on the hospital’s Ethics Committee and Critical Incidents Team and is curren

Mr. Shay joined the NSH Maintenance Team after working as the Yakima Superior Court Community Service Supervisor. He worked with a range of Drug Court clients who helped the elderly with yard work and painted over graffiti throughout the City. More recently, he was also the Yakima County Juvenile Justice Restorative Community Service Leader where he coordinated young people doing community service at the Union Gospel Mission kitchen as well as cleaning up Yakima parks, lakes and streams. 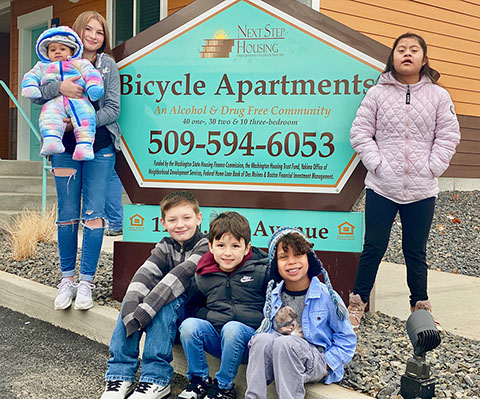